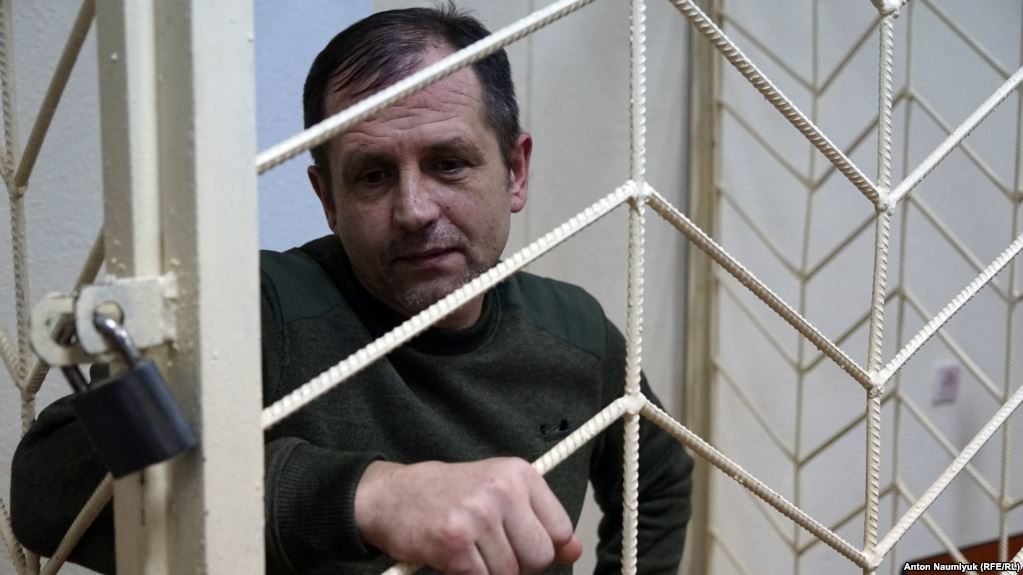 Article by: Alya Shandra with contributions by Ihor Vynokurov; first published at Euromaidanpress

Volodymyr Balukh, the Crimean activist who flew the Ukrainian flag over his house in Russian-occupied Crimea, has gone on a termless hunger strike.

The Crimean farmer who the Russian occupation authorities in Crimea accused of storing ammunition, but human rights defenders believe was jailed for his pro-Ukrainian position, announced this on 19 March 2018, when his 3-year five-months prison term entered into force, the Crimean Human Rights Group reported.

Volodymyr Balukh was sentenced to 3 years and seven months in jail and a RUB 10,000 fine on 16 January 2018 by the so-called “Rozdolnenskyi disctrict court” in occupied Crimea. On 4 March 2018, two months were knocked off his prison term.

Balukh’s gravely falsified trial started on 8 December 2016, when he was arrested in his house in the Serebrianka village of the Rozdolnensky raion in northern Crimea and accused of storing ammunition and explosives (70 rounds for a Kalashnikov gun, 19 cartridges and 5 pieces of TNT) which were presumably found on the attic of his common-law wife. Balukh did not plead guilty. He stated that the case against him was fabricated with the participation of Dmitry Popov, the head of the criminal prosecution of the Rozdolnenskyi police department and that explosives and ammunition were planted.

There are solid grounds to believe Balukh. An examination held on the insistence of lawyer Dmytro Dinze revealed that the ammunition and explosives had fingerprints of the accused, or other signs that he had ever touched them, but concluded that “establishing this is impossible.” The court refused to conduct a re-examination, as well as to conduct a “complex dactyloscopic, biological and genetic expertise.”  Balukh did not have any firearms. According to the materials of the case, the cartridges were produced in 1982 in the Russian city of Barnaul. An expertise on the suitability of explosive devices for their intended use was not carried out at all.

Volodymyr Balukh claims that he saw an unknown person climb to the attic an hour and a half before the witnesses got there.

Moreover, as Volodymyr Balukh himself said in his last word, the main reason why it’s obvious that his case is falsified is that the search during which the ammunition and explosives were discovered in his common-law wife’s attic stopped as soon as they were found. Witnesses in the case say that the search was held at two addresses, his house, where he lives, and his wife’s. His house has four attics and other constructions; none of them was searched by the police. “This, like nothing else, shows that they came for the object that they placed,” said Balukh.

Balukh was outspoken about his pro-Ukrainian position. Starting from December 2013, when the Euromaidan Revolution of Dignity was underway, he raised the Ukrainian flag on the roof of his and his wife’s private houses. After the revolution was over in Kyiv and Russia occupied the Crimean peninsula, he installed a plaque with the inscription “Heroes of Heavenly Hundred Street” on his facade. The plaque was to commemorate dozens of activists killed in the center of the Ukrainian capital in February 2014.

This latter fact was enough to make him an outcast in the eyes of the local occupation authorities and collaborators among the residents of his village. Since the spring of 2015, masked officers of the state security with machine guns routinely invaded his house, searched it and tore down the flag from the roof.

Russian police detained Balukh four times under the pretext of “disobeying” their demands before a more sophisticated criminal case was fabricated against him.

After the arrest, Balukh was openly blamed for not renouncing Ukrainian citizenship and refusing to accept the Russian one.

“It is clear why law enforcers want to shut Balukh up in jail,” explained the lawyer Olga Dinze:

“He has an active stand regarding Crimea and its incorporation into Russia. He considers himself a citizen of Ukraine, whom he essentially is, and is not going to accept Russian citizenship in any way. He is against this and clearly shows [his position], demonstrating a Ukrainian flag on his houses [that is, his own house and his wife’s one]. Of course, the officers of Crimean state security dislike him. And so they simply decided to take him away.”

“If at some point people, God forbid, forget about such words as freedom, dignity, and honor, this world will cease to exist,” Balukh said in his last word.

Yet another criminal case is now underway regarding Balukh. It was opened in August 2017. He was accused of beating the head of the temporary detention center where he was held. This happened after the defense of Balukh filed a complaint stating the opposite: that it was the chief of the detention center Valery Tkachenko who hit the prisoner, insulted him with abusive words and humiliated him on the basis of his nationality. The criminal case was opened after Tkachenko’s complaint.

The authoritative watchdogs, Ukrainian Helsinki Human Rights Union, Crimean Human Rights Group, and Human Rights Information Center recognized Volodymyr Balukh as a prisoner of conscience. They also called on the EU and governments of democratic countries to introduce personal sanctions against the 23 judges and officers of the Russian Federal Security Service, Investigative Committee and occupation police linked to the political persecution of Balukh. The Ukrainian Helsinki Union, in addition, lodged two complaints regarding his unlawful conviction to the European Court of Human Rights.

Volodymyr Balukh is one of at least 66 Ukrainians illegally held by Russia on political charges. Several of them had launched hunger strikes, protesting their falsified trials. The most famous of these is 83-day long hunger strike held by Ukrainian pilot Nadiya Savchenko. Ruslan Zeytullaev, a Crimean Tatar accused of “terrorism,” also held hunger strikes for all Crimean Tatars oppressed by Russia.