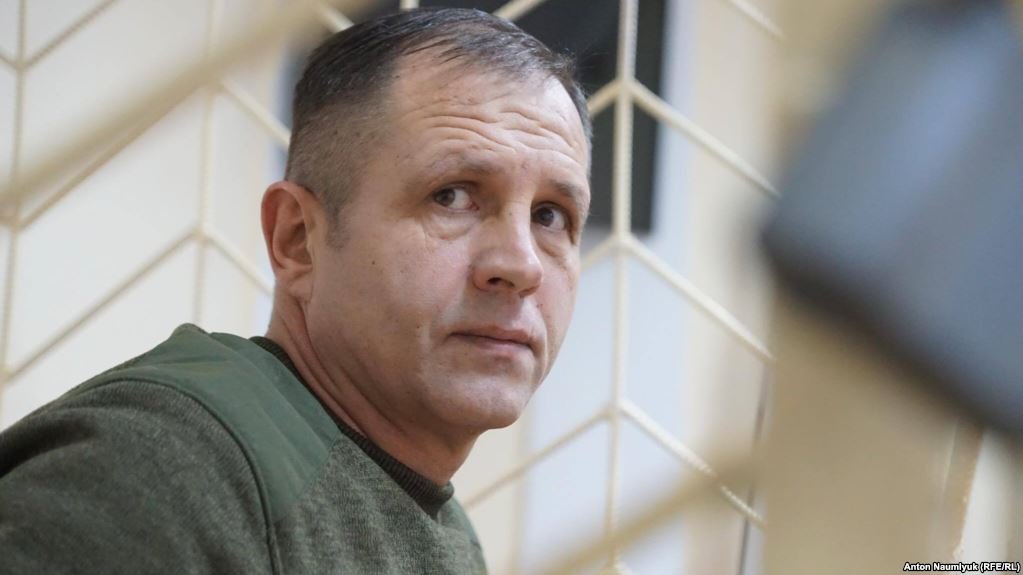 On 16 January 2017, Volodymyr Balukh, the Crimean farmer who kept raising the Ukrainian flag above his house after Russia’s occupation of Crimea, was sentenced to three years and seven months in prison in a second trial which turned out to be as falsified as the first.

Balukh, was was arrested in his house in the Serebrianka village of the Rozdolnensky raion in northern Crimea on 8 December 2016 and was incriminated with illegally storing ammunition and explosives (70 rounds for a Kalashnikov gun, 19 cartridges and 5 pieces of TNT) which were presumably found on the attic of his common law wife. Balukh did not plead guilty. He stated that the case against him was fabricated with the participation of Dmitry Popov, the head of the criminal prosecution of the Rozdolnenskyi police department, and that explosives and ammunition were planted.

After the annexation of Crimea by Russia systematically hung the Ukrainian flag on his house and the house of his common-law wife. His house was searched on multiple occasions and the flag was torn down by law enforcers. During one of the searches, he was beaten up by them. On 29 November 2016, Balukh hung a plaque with the inscription “Street of the Heroes of the Heaven’s Hundred” on the wall of his own house, referring to the activists slain during Ukraine’s Euromaidan revolution. On the same day, the head of the collaborationist village council Vitaliy Stepaniuk came to visit him, threatening to call the police, and demanding Balukh take down the plaque.

On 4 August 2017, the so-called “Rozdolnensky District Court” sentenced Baluch to 3 years and 7 months of imprisonment and a fine of 10 thousand rubles. In early October, the “Supreme Court” of Crimea abolished this verdict and directed the case for additional investigation. However, this “investigation” turned out to be as falsified as the first.

As Volodymyr Balukh himself said in his last word, the main reason why it’s obvious that his case is falsified is that the search during which the ammunition and explosives were discovered in the attic of his common law wife’s attic stopped as soon as they were found.

“The whole accusation is based on one phrase: illegal purchase and storage. But how is this related to me? Tell me, who illegally purchased all this and stored it in the attic of my common law wife’s attic until a certain moment. The simplest proof that I have nothing to do with it is the fact that there are witnesses in the case who say that the search was held at two addresses, including the one where I live with my mother from nearly my birth. It has four attics: none of them was searched. There are other constructions there, and places to search for such objects, as can be seen from the passports of the buildings. However, the search at the place of residence of my common law wife stopped as soon as something was found. This, like nothing else, shows that they came for the object that they placed.”

The retrial had taken place in the same Rozdolnynskyi District Court, but under judge Yelena Tedeyeva, who was as willing as her colleague Maria Bedritskaya to ignore evidence that the ammunition and explosives were planted. There is multiple evidence to this extent:

Human rights defenders consider the criminal case against Balukh continues the activist’s persecution for his pro-Ukrainian position. Shortly before the ammunition and explosives were “discovered” in the house belonging to his common law wife, the activist was offered a choice: to either leave Crimea, or go to prison. He stayed on the peninsula to care for his elderly mother.

An examination held on the insistence of lawyer Dmytro Dinze, revealed that the ammunition and explosives had fingerprints of the accused, or other signs that he had ever touched them, but concluded that “establishing this is impossible.” The court refused to conduct a re-examination, as well as to conduct a “complex dactyloscopic, biological and genetic expertise.”  Balukh did possess have any firearms. According to the materials of the case, the cartridges were produced in 1982 in the Russian city of Barnaul. An expertise on the suitability of explosive devices for their intended use was not carried out at all.

Volodymyr Balukh claims that he saw an unknown person climb to the attic an hour and a half before the witnesses got there.

Volodymyr Balukh is one of at least 64 Ukrainians imprisoned by Russia on political motives. See who they are and how you can help free them at the website letmypeoplego.org.ua.