During the Eurovision contest in Kyiv, 2,500 leaflets with information on the Ukrainian hostages of the Kremlin were given out to the foreign guests visiting Kyiv. These leaflets were produced by Euromaidan Press within the #LetMyPeopleGo campaign, printed with the help of our generous donors donating money to our PayPal (euromaidanpress@gmail.com), and distributed by many volunteers caring about the fate of the 44 Ukrainian hostages of the Kremlin. 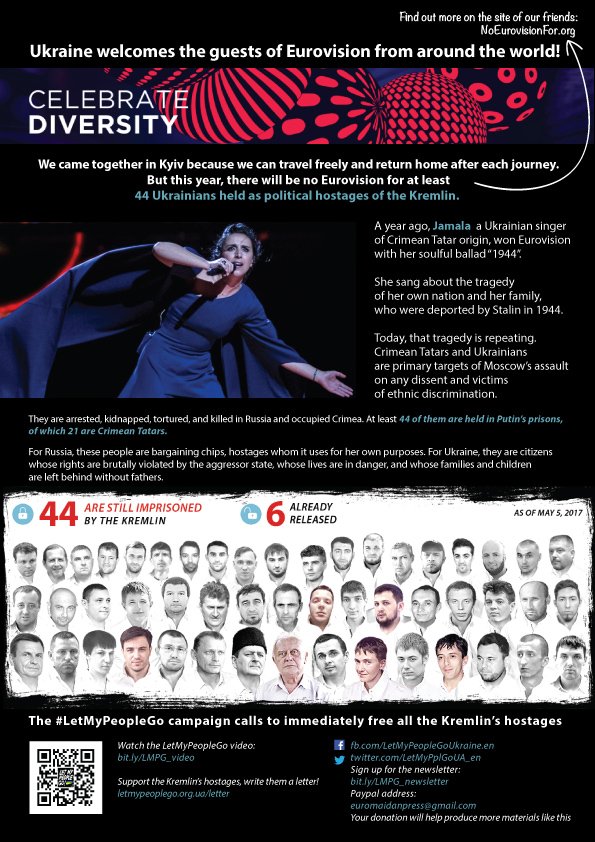 We came together in Kyiv because we can travel freely and return home after each journey.

But this year, there will be no Eurovision for at least 44 Ukrainians held as political hostages of the Kremlin (Find out more on the site of our friends: NoEurovisionFor.org).

A year ago, Jamala, a Ukrainian singer of Crimean Tatar origin, won Eurovision with her soulful ballad 1944. She sang about the tragedy of her own nation and her family, who were deported by Stalin in 1944.

Today, that tragedy is repeating. Crimean Tatars and Ukrainians are primary targets of Moscow’s assault on any dissent and victims of ethnic discrimination.

They are arrested, kidnapped, tortured, and killed in Russia and occupied Crimea. At least 44 of them are held in Putin’s prisons, of which 21 are Crimean Tatars.

For Russia, these people are bargaining chips, hostages whom it uses for her own purposes. For Ukraine, they are citizens whose rights are brutally violated by the aggressor state, whose lives are in danger, and whose families and children are left behind without fathers. 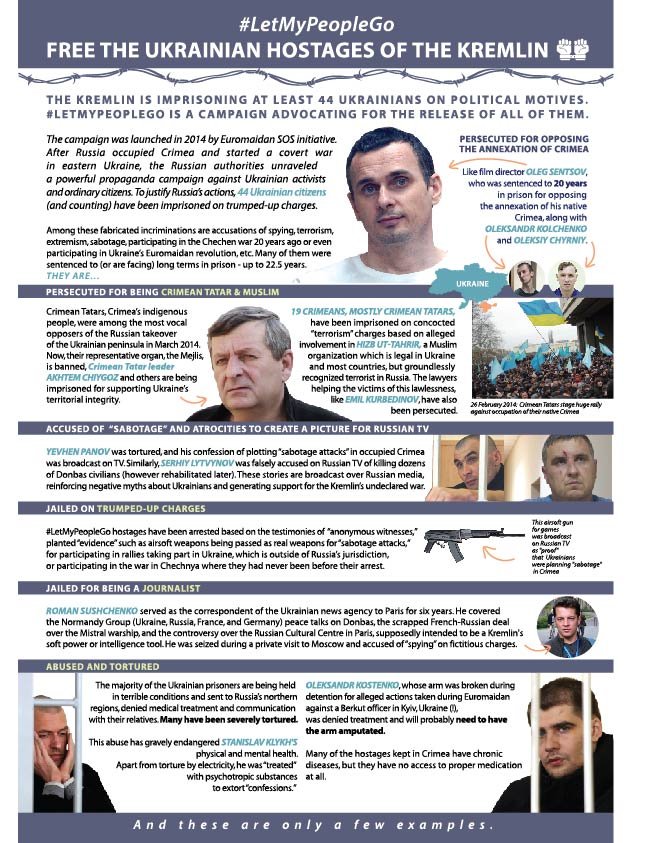 #LetMyPeopleGo – free the Ukrainian hostages of the Kremlin

The Kremlin has jailed at least 44 Ukrainians on political motives. #LetMyPeopleGo is a campaign advocating for the release of all of them.

After Russia occupied Crimea and started a war in eastern Ukraine, Moscow unraveled a powerful propaganda campaign against Ukrainian activists and ordinary citizens. To justify her actions, 44 Ukrainian citizens have been imprisoned on trumped-up charges.

Among these fabricated incriminations are spying, terrorism, extremism, sabotage, imaginary participation of the Chechen War 20 years ago or even taking part in Ukraine’s Euromaidan revolution.

Many of them were sentenced to (or are facing) long terms in prison – 20 years and more.

Persecuted for opposing the annexation of Crimea

Like film director OLEG SENTSOV, who was sentenced to 20 years in jail, along with OLEKSANDR KOLCHENKO and OLEKSIY CHYRNIY.

Chased for being Crimean Tatar & Muslim

Crimean Tatars, Crimea’s indigenous people, were among the most vocal opposers of the Russian takeover of the Ukrainian peninsula in March 2014. Now, their representative organ, the Mejlis, is banned, Crimean Tatar leader AKHTEM CHIYGOZ is in prison for supporting Ukraine’s territorial integrity. 19 Crimeans, mostly Crimean Tatars, have been imprisoned for alleged involvement in Hizb ut-Tahrir, a Muslim organization which is legal almost everywhere but in Russia.

YEVHEN PANOV was tortured, and his confession of plotting “sabotage attacks” in occupied Crimea was broadcast on TV. Similarly, SERHIY LYTVYNOV was falsely accused of killing dozens of Donbas civilians. These stories are circulated by Russian propaganda to reinforce negative myths about Ukrainians and generate support for the Kremlin’s undeclared war.

Punished for defending others’ rights

Human rights activist EMIR USEIN KUKU searched for the abducted and helped the arrested after the annexation of Crimea. To stop him, the Russian “authorities” detained Emir on groundless charges of “extremism.” Moreover, they intimidate his little kids while cynically blaming… the prisoner himself for not looking after them since the arrest.

#LetMyPeopleGo hostages have been arrested based on the testimonies of “anonymous witnesses” and planted “evidence” such as airsoft weapons being passed as real weapons for “sabotage attacks.”

Jailed for being a journalist

ROMAN SUSHCHENKO served as the Ukrainian correspondent to Paris, covering the secret networks of Russian influence in France and Europe. He was decoyed to Moscow, seized and accused of “spying” on fictitious charges.

Ukrainian prisoners are held in terrible conditions and sent to Russia’s northern regions, denied medical care and communication with their relatives. Many have been severely tortured.

This abuse has gravely endangered STANISLAV KLYKH‘s physical and mental health. Apart from torture by electricity, he was “treated” with psychotropic substances to extort “confessions.”

OLEKSANDR KOSTENKO, arrested for taking part in Euromaidan in Kyiv (!), will probably need to have his arm amputated after it was broken in Russian custody.

And these are ONLY A FEW examples