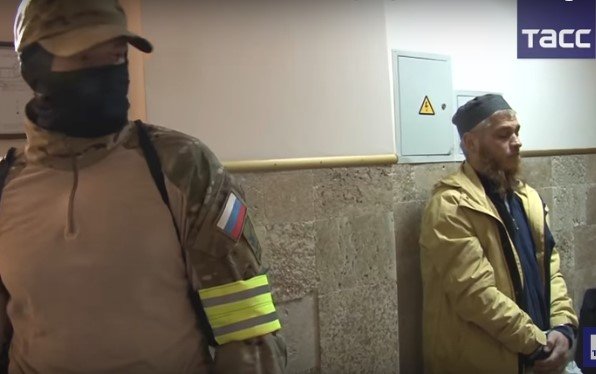 Four Crimean Tatars were detained by the Russian secret police in annexed Crimea on 2 October 2017. Screenshot from an FSB video circulated by TASS

The Russian occupation authorities of Crimea appear to have launched a new repressive wave to demonstrate how they safeguard their citizens from imaginary threats stemming from pro-Ukrainian communities. The recent assault on Muslims of Crimean Tatar origin is likely to follow the previous model case which so far ended with nineteen believers jailed for their privately held beliefs. It also nearly coincides with the conviction of the two leaders of the Crimean Tatar Mejlis, Akhtem Chiygoz and Ilmi Umerov, and the Ukrainian dissident journalist Mykola Semena, who all publicly opposed the illegal annexation of Crimea.

Victims of the Russian “police of thought”

On 2 October, masked Russian security officers raided the house of Renat Suleymanov, the father of three daughters. They took him away in a car with a hidden license plate. On the same day, three other Crimean Tatars, citizens of Ukraine, were detained: Arsen Kubedinov (who has four little kids), Seyran Mustafayev, and 64-y.o. veteran of labor Talyat Abdurakhmanov.

The investigators recorded the voice of Suleymanov for examination. According to the lawyer Edem Semedlyaev, this indicates that his conversations are likely to have been wiretapped before.

Article 282.2 (on “extremism”) of the Russian Criminal Code which is imputed to them, stipulates punishment ranging from a 300,000 RUB-fine (nearly $5,200) to ten-year imprisonment.

The notorious Crimean judge Viktor Mozhelyanskiy, known for his betrayal of Ukraine and lawless conviction of the Euromaidan participant Oleksandr Kostenko, sent Suleymanov, Abdurakhmanov, and Kubedinov to SIZO (remand jail) until 29 November, and placed Mustafayev under home arrest. The aged Talyat Abdurakhmanov could barely hear the words of the judge, who groundlessly deprived him of freedom. Relatives and supporters of the accused Crimean Tatars in a district court of Simferopol, 3 October 2017. Photo: Crimean Solidarity

Mustafayev reportedly avoided SIZO because of the intervention of the Spiritual Directorate of Crimea’s Muslims, whose leaders collaborate with Russian occupiers. The Directorate is said to have agreed to intercede for the detained believers but only on condition that they admit their “guilt” and renounce the independent legal defense. The investigators are also pressing them into false confessions in exchange for softer prospective sentences.

The four detained persons became the victims of the “police of thought” the occupiers are creating in Crimea, believes the human rights advocate Enver Kadyrov:

“Russian authorities have detained peaceful people, Muslims, who did not call anybody to anything. They are very responsive, always offered their help, and they’ve never voiced any extremist slogans. We see that the Kremlin has wanted to control even the thoughts of various groups within the society for a long time. Any dissent is doomed to a ban. Now the Russian reality is projected onto annexed Crimea.”

Nothing compromising about Tabligi Jamaat in Crimea and Russia, experts say

On the day the Crimean Tatar houses were invaded, the FSB boasted about the liquidation of three cells of the “extremist” organization Tabligi Jamaat. Such a statement clearly aims to shock and scare the listener with the unknown name of the supposed “enemy,” making use of the poor awareness of the audience, popular xenophobia, and colonialist mythology of the Putin era. The alliance between the Kremlin and the Russian Orthodox clerics results in the formation of a repressive state, implies the cartoon where the figures of ex-KGB officer Putin and Patriarch Kirill allude to the famous Worker and Kolkhoz Woman statue, a symbol of the USSR

Tabligi Jamaat (Society for the Dissemination of Faith) is a non-political religious movement founded in India in 1926. It puts forward as its main goals the revival of Islam and the peaceful spiritual transformation of people according to the Islamic principles. In 2009, the organization was declared “extremist” and banned in the Russian Federation. When adopting this decision, the Supreme Court of Russia defined the movement as the threat to the territorial integrity of the Federation, as its activists allegedly propagated the establishment of the global Caliphate and were involved in terrorist activities.

However, as the director of the Central Asian program of the Memorial Human Rights Center Vitaly Ponomaryov notes, none of these accusations corresponded to the facts. “As far as I know,” he says, “the FSB [Russia’s Federal Secret Service] simply falsified the materials for the Supreme Court.” Since the ban, a number of supposed supporters of Tabligi Jamaat have been persecuted and jailed in Russia’s capital and regions, particularly Tatarstan and Bashkortostan.

According to Vitaly Naumkin, who in 2009 was director of the Institute for Oriental Studies at the Russian Academy of Sciences, Tabligi Jamaat had “never been noticed in any terrorist or extremist activities.” Until this moment, Tabligi Jamaat movement has been unknown to Crimea, writes the head of the Mejlis of the Crimean Tatar People Refat Chunarov. In his view, the emergence of its name in the Crimean FSB vocabulary demonstrates that the previous attempt to compromise the Crimean Tatars, linking them to the international Islamic party Hizb ut-Tahrir, failed.

“I suppose that the name of Tabligi Jamaat appeared also because the chief of Russia’s FSB directorate in occupied Crimea is Viktor Palagin, who is known after his bloody campaigns against Muslims in Bashkortostan and the Republic of Mari El. There he was fighting Tabligi Jamaat,” Chubarov reminds.

Kremlin’s vindictive response to the UN?

The lawyers Edem Semedlyaev and Emil Kurbedinov consider the recent charges of “extremism” against the four Crimean Tatars as the occupiers’ reaction to the report on Crimea issued by the Office of the United Nations High Commissioner for Human Rights at the end of September.

“While those human rights violations and abuses have affected Crimean residents of diverse ethnic backgrounds, Crimean Tatars were particularly targeted,” the report reads. “Intrusive law enforcement raids of private properties have also disproportionately affected the Crimean Tatars and interfered with their right to privacy under the justification of fighting extremism.” Edem Semedlyaev (left) and Emil Kurbedinov on the trial of their client, the Crimean Tatar Muslim activist Ruslan Zeytullaev, who was sentenced to 15 years in prison for private conversations equated by Russian judges to “terrorist activity.” Photo: RFE/RL

Semedlyaev and Kurbedinov stress that no large political cases had been instituted until the fall of 2017. However, after the UN report, Russian authorities are zealously trying to persuade the world that their enemy is not the Crimean Tatar community but some indefinite “extremists” who provide self-incriminating evidence. That is why they need the Spiritual Directorate of Crimea’s Muslims so much: to obtain from the defendants the “confessions” of the crimes they are not guilty.

“This tactics is, of course, directed not only to the foreign world—although it is primary, to my mind—but also to the domestic audience: they [the regime and its guardians] need to assure all the time that either they are fighting threats and challenges or catastrophes would befall the Russian society. They have no other tactics—otherwise they would have to acknowledge that in reality, they are simply ousting the native people of Crimea, the Crimean Tatars, from the peninsula.”

The spokesperson for the Ukrainian Foreign Ministry compared the recent searches and detentions in Crimea to the practice of the Stalinist secret police and demanded Russia stop the anti-Crimean Tatar discrimination.

In its resolution adopted on 5 October, the European Parliament called on the Kremlin regime to put an end to the politically motivated repression of Crimean Tatars and Ukrainians and free all the Ukrainian citizens illegally arrested, tried, or convicted since 2014. With newly persecuted Renat Suleymanov, Arsen Kubedinov, Seyran Mustafayev, and Talyat Abdurakhmanov, their list would exceed 50 names.