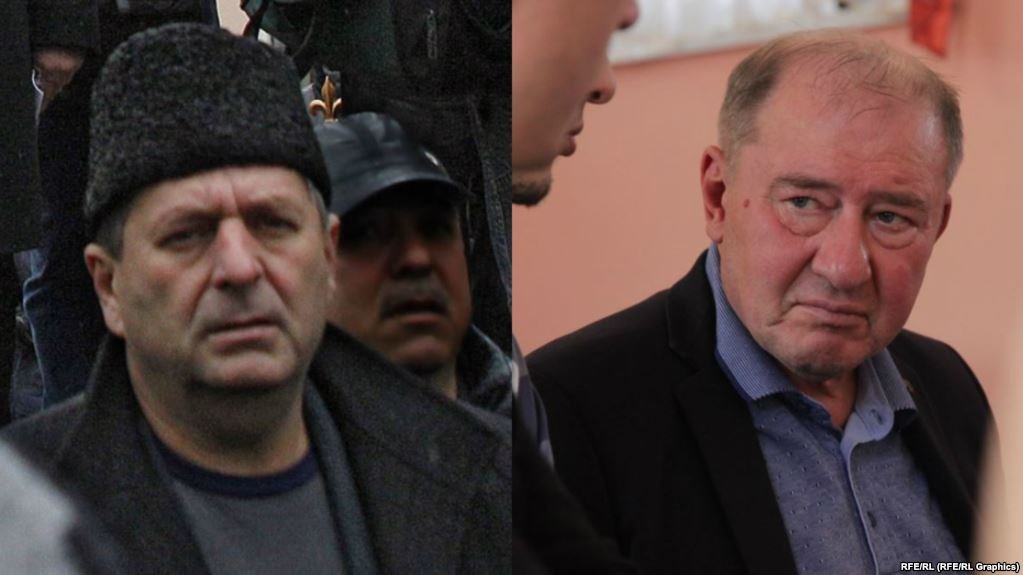 Crimean Tatar leaders Akhtem Chiygoz and Ilmi Umerov, who were sentenced in occupied Crimea in politically motivated trials, have been reportedly pardoned by Russian President Vladimir Putin and have landed in Turkey, multiple sources reported on 25 October. Lawyer Nikolai Polozov, who represented the interests of both defendants but was illegally prevented from remaining Umerov’s lawyer, posted on facebook that the two Ukrainian political prisoners are now free and exempt from criminal prosecution, saying that this is a result of “titanic efforts, successful legal, political, and diplomatic work.”

Mustafa Dzhemilev, a veteran of the Crimean Tatar movement, Ukrainian MP, and Commissioner of the President of Ukraine in the affairs of the Crimean Tatar people, told the ATR TV channel that the two political prisoners departed to Ukraine from Turkey, Interfax reported. He added that according to Nikolai Polozov, the two prisoners were transported to the Simferopol airport at 10:30 AM and left for Anapa. At 13:30, the airplane left from Anapa to Ankara, after which Chiygoz and Umerov will head to Ukraine. Dzhemilev added that this was a result of negotiations between Russian President Putin and Turkish President Erdogan. At 15:41, Ukrainian President Poroshenko’s press secretary informed the two ex-prisoners had landed in Ankara and that their liberation was possible thanks to negotiations between Poroshenko and Erdogan in New York and Kyiv.

Refat Chubarov, Head of the Crimean Tatar Mejlis, informed that the issue of the release of the two prisoners had been discussed over the last two weeks and expressed his gratitude to everyone who contributed to their liberation. Speaking to 112.ua, he added that they will live and work in Kyiv, as their liberation through Turkey indicates that they will be banned from living in their native Crimea.

The first vice speaker of the Verkhovna Rada Iryna Herashchenko said that Erdogan joined the campaign to liberate Umerov and Chiygoz on the personal request of Ukrainian President Petro Poroshenko and that the two Crimean Tatars were persuaded to plead for pardon to Putin but refused, which was also confirmed by Nikolai Polozov speaking to Krym Realii.

“Hurray! They are free. I thank the President, the Minister of Foreign Affairs, Mustafa Dzhemilev and Refat Chubarov, everyone who participated, all the friends of Ukraine in PACE, OSCE, the EU, who fought to free the political prisoners, their lawyers, all the volunteers, all the Crimean Tatars, all those who cared. And the real Friends – Turkey. And the Turkish President Mr. Erdogan. This is a mutual important victory,” she wrote on facebook.

Ukrainian President Petro Poroshenko thanked Turkish President Recep Erdogan for his efforts in freeing the Crimean Tatars and noted that the issue of Ukrainian hostages of the Kremlin will remain a priority for him during his negotiations with world leaders.

At present, there are at least 47 Ukrainian prisoners illegally held by the Kremlin. On 11 September 2017, the Kremlin-controlled Supreme Court of Crimea sentenced Akhtem Chiygoz, deputy head of the Crimean Tatar national representative body, the Mejlis, to 8 years in a penal colony. Chiygoz was detained in January 2015 for participating in a rally in support of the territorial integrity of Ukraine in front of the building of the Verkhovna Rada of the Crimea on 26 February 2014, prior to Crimea’s annexation by Russia. At that time, the protesters were opposed by pro-Russian activists, including the “Russian Unity” party. The Russian authorities of the annexed Crimea accuse Chiygoz of organizing riots.

On 27 September, the Kremlin-controlled Simferopol district court sentenced Ilmi Umerov, one of the senior leaders of the Crimean Tatar national movement and also deputy head of the Mejlis of the Crimean Tatar People, to 2 years of settlement colony, prohibiting him from engaging in public activities for two years and speaking in the media. Umerov was found guilty of violating Russia’s territorial integrity on the pretext of his public denial of Moscow’s “right” to Crimea. One of the most striking things about his conviction is that a Russian prosecutor demanded only a suspended sentence but the court decided in favor of a real one. Ilmi Umerov has a number of chronic diseases and needs constant medical care.

In April 2016, the Russian-controlled “Supreme Court of Crimea,” the legitimacy of which is denied by most countries of the world, declared the Mejlis an extremist organization and forbade its activities in Russia. The Council of Europe had demanded Russia reinstate the Mejlis. As well, the UN Court of Justice ruled Russia must reinstate the Mejlis, granting Ukraine’s request to make Russia comply with the International Convention on the Elimination of All Forms of Racial Discrimination.

In a resolution adopted on 6 October 2017, the EU Parliament adopted a resolution demanding Russia release its 47 Ukrainian de facto political prisoners and called for sanctions to be imposed on those responsible for politically motivated processes. Yet, Russia is not ceasing its repressions against the indigenous population of the peninsula it occupied and has arrested more prisoners in a new wave of religious persecution. A recent UN report had condemned Russia’s human rights abuses in occupied Crimea. Russia has been recognized as an occupying power in Crimea by a UN resolution.

To date, six of the Ukrainian hostages of the Kremlin have escaped Russian prison. Yuriy Yatsenko and Borys Yarychevskyi, who had resorted to self-mutilation as the only chance to escape torture during interrogations by the FSB; Nadiya Savchenko, who was exchanged for two GRU military intelligence officers who were Russian prisoners of war in Donbas, Gennadiy Afanasiev and Yuriy Soloshenko, who were exchanged for two pro-Russian separatists from Odesa, Yuriy Ilchenko, who reportedly escaped from prison in occupied Crimea, and Hayser Dzhemilev, whose term expired.