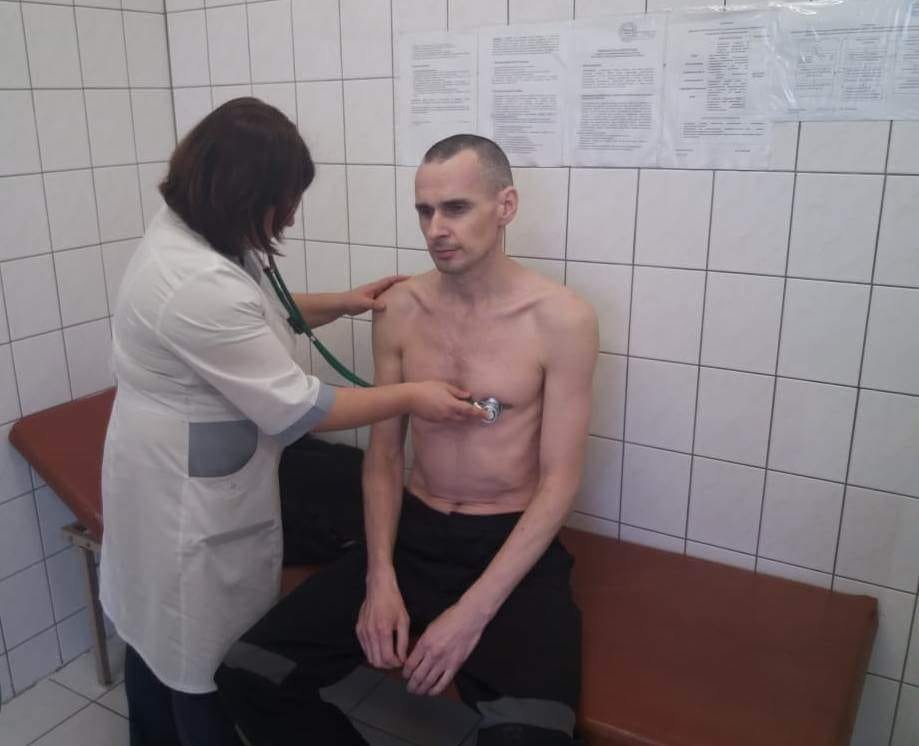 Sentsov during a medical checkup on the 138th day of his hunger strike. Photo: Russia’s penitentiary service

Oleg Sentsov, a Ukrainian filmmaker accused of terrorism by Russia, has announced that he is stopping the hunger strike that he had started on 14 May 2018, demanding to free all the Ukrainian political prisoners held by Russia.

He stated this in a letter which his lawyer Dmitri Dinze shared with the Novaya Gazeta newspaper. Here is a translation:

“Due to the critical state of my health, and also with the pathological changes which have begun in my internal organs, I was scheduled to be force-fed in the very near future. My opinion is not taken into account. Allegedly, I am no longer able to adequately assess the level of health and danger to it. Forced feeding will be carried out as part of resuscitation measures to save the patient’s life. In these conditions, I have to stop my hunger strike from tomorrow, that is, from 6.10.18.

145 days of struggle, minus 20 kg of weight, a broken-down organism, but the goal was not achieved. I am grateful to everyone who supported me, and I apologize to those whom I have failed…

His lawyer Dmitri Dinze told Current Time that Sentsov was not left a choice, having been told by the prison management that if he doesn’t stop the hunger strike, he will be taken to intensive care, tied to the bed, and force-fed through a tube. Dinze said that Sentsov was told he would be turned into a “vegetable” lying on the bed with a tube in his nose or mouth.

“Naturally, he didn’t want to stop the hunger strike. This is was a forced measure,” Dinze said.

According to Dinze, Sentsov has a 50% chance of making it out of the hunger strike:

“Oleg’s liver has started disintegrating, the kidneys are already so clogged that they practically do not function. Large problems with the intestines and stomach have begun, and he also has developed myocardial ischemia.”

Valery Maksimenko, deputy director of Russia’s penitentiary service, said that Sentsov wasn’t threatened, but instead “persuaded and explained.” “He was just told that he won’t be able to die in any case,” BBC quoted him as saying. Maksimenko informed that a diet has been developed to take Sentsov off the hunger strike. He said that the Ukrainian filmmaker’s state is normal and rehabilitation will take 2-3 weeks.

Sentsov launched his hunger strike prior to the World Cup in Russia.

“If I die before the World Cup or during it, there will be a resonance in favor of other political prisoners,” he told his lawyer Dmitry Dinze who visited him in the prison colony Labytnangi in May 2018.

And a resonance there was indeed. Government officials and celebrities all over the world have spoken out in support of Oleg Sentsov. PEN International spearheaded a campaign to free him. Various filmmaking societies, intellectuals, and human rights organizations have called upon Russia to free Sentsov and the French and Czechs even launched chain hunger strikes in his support. Ukrainian political prisoners held by Russia were cited as one of the reasons EU state officials should boycott upcoming World Cup in a letter signed by 60 MEPs. There were even discussions about exchanging Sentsov for Russians sentenced in Ukraine for participating in warfare in Donbas, but nothing came out of it.

Starting from mid-July, Sentsov’s health was sustained by small quantities of nutritious substances – a demand of the Russian prison service which Sentsov agreed to in order to evade being force-fed.

But closer to the end of September, his health was severely faltering as he wrote his cousin that he feels “the end is near,” as well as made a will.

Sentsov’s hunger strike has not resulted in Russia releasing the circa 70 Ukrainians it is holding as hostages and treating as bargaining chips. But it did make their problem known all over the world.

Oleg Sentsov, a native of Crimea, was arrested on 11 May 2014 shortly after the Russian occupation of Crimea. Together with three other Crimeans, Oleksandr Kolchenko, Gennadiy Afanasyev, and Oleksiy Chirniy, he was accused of “plotting acts of terrorism” and being part of the Right Sector, a far-right Ukrainian organization Russia outlawed. These accusations are based entirely on testimonies of Gennadiy Afanasiev and Oleksiy Chirniy.  Both Afanasiev and Chirniy have stated they were tortured by FSB, and after their “confessions” were sentenced to the least possible punishment for terrorism, 7 years of jail, whereas Sentsov, the “leader” of the “terrorist group,” was sentenced to 20 years and Kolchenko to 10 years. On 31 July 2015 Afanasyev retracted his testimony as given under duress. After that, he was beaten again in prison. Sentsov and Kolchenko have stated repeatedly that they were tortured and beaten, and there is nothing to assume that the same didn’t happen to Chirniy.

Afanasyev was exchanged on 14 June 2016 together with another Ukrainian political prisoner, the elderly Yuri Soloshenko. Yet Sentsov, Kolchenko, and Chirniy are still imprisoned. Overall, there are at least 70 Ukrainian political prisoners in Russia who are imprisoned in both mainland Russia and occupied Crimea on trumped-up charges. The reasons for their imprisonment vary, yet most cases are used for the purposes of Russian propaganda, which portray the Ukrainians as dangerous criminals, terrorists, and saboteurs in order to justify Russia’s aggression against Ukraine.

At present, Sentsov is being held in the in the “White Bear” colony in the city of Labytnagi in Siberia.

He is not the only Ukrainian political prisoner to have announced a hunger strike. The now-released pilot Nadiya Savchenko has held lengthy hunger strikes against her falsified trial, Ruslan Zeytullaev, a Crimean Tatar construction worker accused of terrorism on the unproven basis of belonging to the peaceful Islamic organization of Hizb ut-Tahrir, had also launched a hunger strike demanding to stop repressions against him and other Crimean Tatars Russia is arresting en masse. And most recently, the Crimean farmer Volodymyr Balukh who was jailed for flying the Ukrainian flag above his house launched a hunger strike on 19 April 2018 and is still keeping to it.