Multiple filmmakers and cultural actors around the world (including Pussy Riot’s Maria Alyokhina) are mobilizing for the Ukrainian filmmaker Oleg Sentsov. The latter was arrested in May 2014, a few days after the annexation of the Crimea, under the charge of “preparing terrorist acts,” and sentenced in August 2015 to twenty years of imprisonment under a strongly contested trial. This is an English translation of their appeal, originally published on liberation.fr.

I spent two years in prison for a song about Putin. Oleg Sentsov has never sang a song, but he received a 20-year sentence from the court. Oleg Sentsov is a Ukrainian film director, whom the [Russian] government has accused of terrorism for allegedly attempting to detonate a Lenin monument in Crimea. Oleg is 40 years old and has two children left without a father.

20 years in prison in Russia means death! It is obvious that Sentsov did not detonate the monument – his ‘fault’ was simply to be a Crimean citizen who openly denounced the situation of the annexation. I am convinced that the release of Sentsov is a common cause. This artist should be free. And as I said on the occasion of the European Film Awards: A united community can make a difference. That’s why I ask you to stand up and defend Oleg.

– Maria Alyokhina (Pussy Riot), on the occasion of the 29th European Film Awards in Wroclaw, Poland, on December 10, 2016

In reply, Mr. Putin reminded that artists should be careful and not “exceed the limits,” that is, not to offend religious feelings. He then referred to the 2015 attack on Charlie Hebdo as an example of the danger of offending religious feelings.

But he also added that “there is a very narrow line between dangerous buffoonery and freedom of expression.”

[Alexander] Sokurov, who won the Golden Lion at the Venice Film Festival in 2011 with his film Faust, reacted sharply: “Who will then protect the atheists?”

He addressed Putin and demanded the release of Oleg Sentsov:

“He should compete with me at film festivals, not sit in our Arctic prison,” said Sokurov. “It’s a shame, it’s sad.”

Unshakable, Putin insisted that the court had found Sentsov guilty of preparing terrorist attacks and convicted him.

Read more: The Sentsov-Kolchenko case: What you need to know

The so-called ‘trial’ was denounced by Human Rights Watch as ‘Stalinist’ because Oleg and his co-accused Oleksandr Kolchenko had been kidnapped in Crimea a few weeks after its annexation by Moscow and imprisoned in Russia. In order to be able to judge them, the Russian authorities forced them to uptake the Russian citizenship, while neither of them had ever asked for it and both had continuously asserted their Ukrainian nationality. “I’m not a serf to be transferred with the land,” shouted Sentsov at the end of his trial, feeling utterly outraged.

Source: Unbroken after a year of show trials: Oleg Sentsov’s most inspiring quotes

As no real evidence was adduced, this conviction was based on a testimony obtained by the FSB (ex-KGB) through intimidation, despite the demands of lawyers for a fair trial. The accusations of torture were not investigated. The ‘tendency’ to incarcerate artists in Russia had arisen with the tightening of control on the national political scene following the third election of Putin in 2012.

The artist Piotr Pavlensky was imprisoned in 2015. He spent seven months behind bars until a court ordered his release last June after the mobilization of public opinion.

Many other cases exist.

France is the friend of Russian civil society and its artists. The current political regime is dangerously attacking fundamental freedoms and makes use of intimidation to create the fear of being imprisoned, calling into question the very principle of democracy in Russia. Artists are the free voices of society.

Today more than ever, we ask our government to assert strongly the freedom of expression and the artists’ role in society. France cannot remain deaf, blind, and mute: we have to remind the Kremlin that it must respect its obligations under the Minsk agreement and release Sentsov, Kolchenko, and all the illegally detained Ukrainians.

We also ask our candidates to the presidential election who wish to engage in a closer relationship with the leader of the Kremlin to express clearly their opinion and their position on Mr. Putin’s remarks regarding the limitations of the rights of artists to the freedom of expression and creativity, especially when they take religion as a subject for exercising their art. 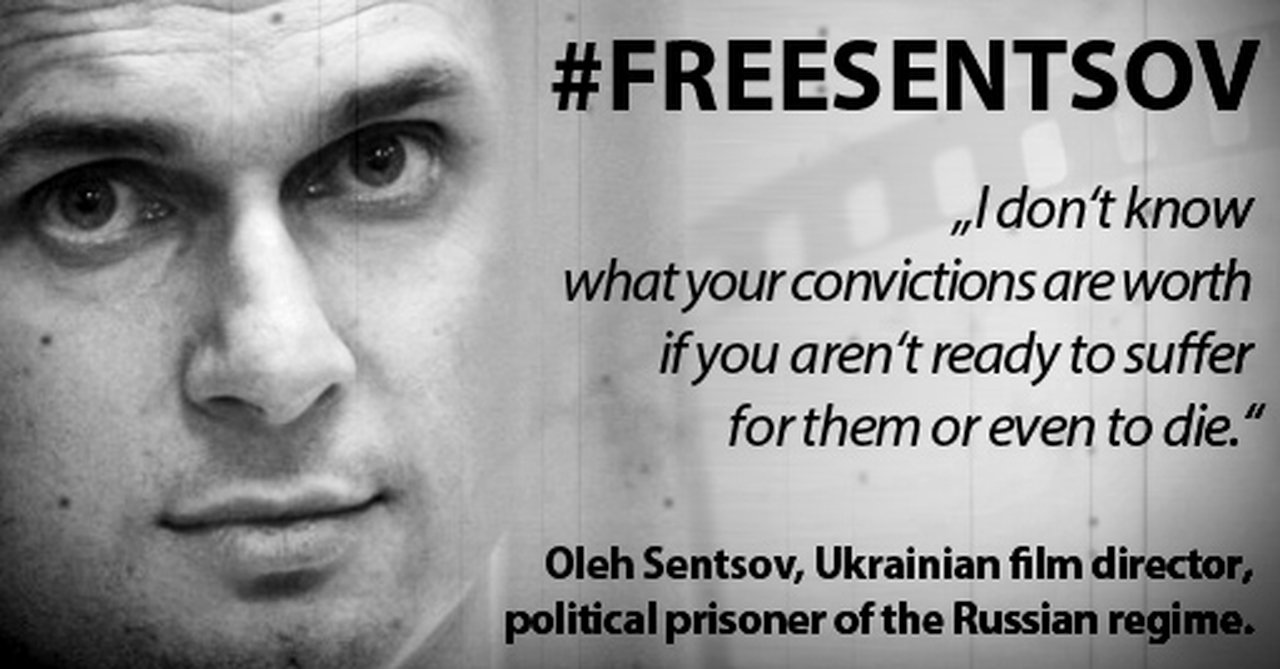 Source: Unbroken after a year of show trials: Oleg Sentsov’s most inspiring quotes

We filmmakers, artists, cultural actors, and citizens have been totally outraged by such encroachments on the freedoms of expression and creativity and are revolted about the situation of Oleg and all the artists or opponents illegally imprisoned in Russia.

Among the first signatories:

In June 2014, in a movement initiated by the Board of Directors of the European Academy of Cinema, European filmmakers, including Pedro Almodóvar, Ken Loach, Mike Leigh, Aki Kaurismaki, Stephen Daldry, Bertrand Tavernier and Wim Wenders, called on President Vladimir Putin to free Sentsov. They also called on the Russian government to conduct a “prompt, thorough and impartial investigation into this visibly arbitrary investigation by the FSB (ex-KGB).”

In August 2015, on the initiative of the Board of Directors of the European Film Academy, another letter was sent to the Russian authorities requesting the immediate release of Oleg.

On December 10, 2016, during the 29th European Film Awards ceremony in Wroclaw, Poland, Maria Alyokhina of punk band Pussy Riot (whose members were imprisoned for criticizing Russian President Vladimir Putin) again called for the his release.