“Say ‘Release Sentsov!’ It’s the only thing we can do to feel human” 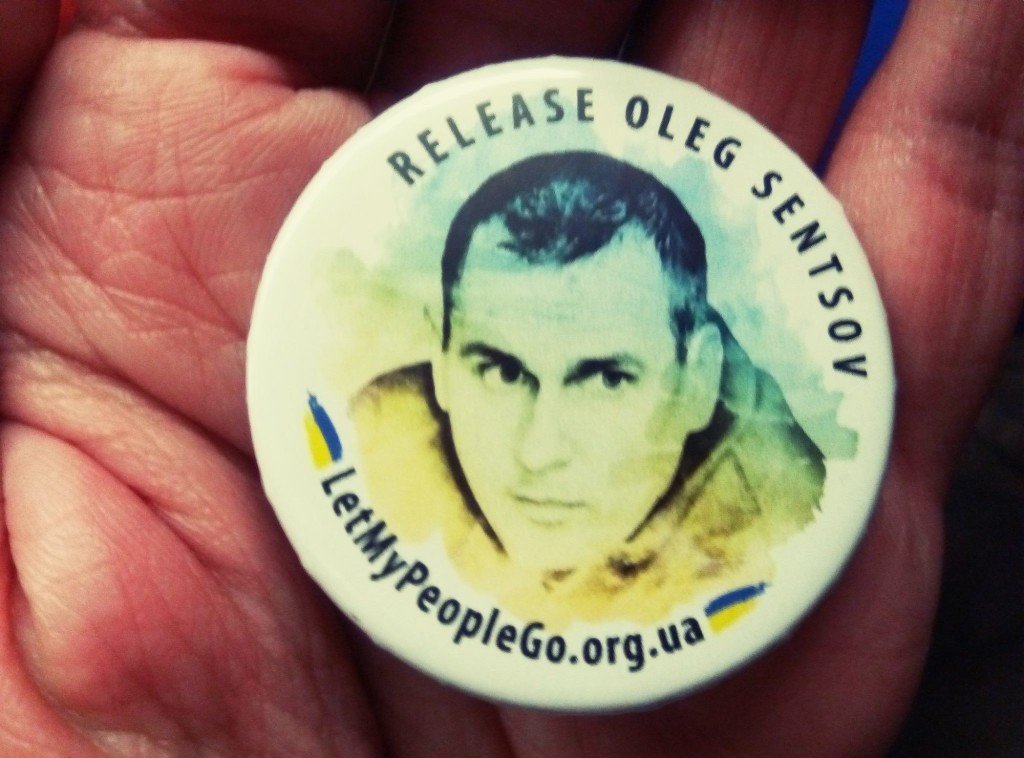 The Ukrainian Canadian Film Festival held a screening Monday night in Ottawa of a powerful documentary called “The Trial: The State of Russia vs Oleg Sentsov.” The film is about the most famous Ukrainian prisoner of conscience held by Russia, the film director and writer Oleg Sentsov, 41. It concerns the events of his Kafka-esque show trial by the Russian occupation authorities in Crimea. “The Trial” is by Askold Kurov, and is a 2017 Poland-Estonia-Czechia co-production.

The case against Oleg Sentsov was fabricated and political. The charges were that Sentsov was the head of a terrorist organization and leader of a plot to blow up monuments. But the Russian authorities presented no evidence and no witnesses, and were completely unconcerned that the trial of Oleg Sentsov was seen internationally to be a sham. As the documentary “The Trial” demonstrates, the point of persecuting Sentsov publicly was to feed hate propaganda to Russians and to terrorize subject Ukrainians in Crimea. As Sentsov himself observed, his sentence of 20 years imprisonment did not come at the end of his trial on 25 August 2015 – it was determined at the very beginning of his ordeal, when Russian Federal Security Service (FSB) agents abducted him on 11 May 2014.

Oleg Sentsov is a rising star in Ukrainian cinema. His film Gaamer got him noticed at international film festivals in 2012. He was working on his next film project, Rhino, when the EuroMaidan protests broke out in Kyiv in late 2013. He joined the group called “AutoMaidan” which was very effective in shaming corrupt public officials and in supporting the people-power protests that were quickly evolving into the Revolution of Dignity. With the Revolution triumphant, Oleg Sentsov went to his home in Crimea when Russia began its “little green men” invasion and occupation of Ukraine on 20 February 2014. Sentsov helped Ukrainian soldiers, airmen, and sailors who were besieged in their barracks and on ships, and he helped families under imminent threat to escape from the Russians who were swarming over Crimea. He always used the peaceful, non-violent means practiced by AutoMaidan in defense of Ukraine and in defense of his way of life.

Putin hates and fears the Revolution of Dignity in Ukraine for the mortal threat it poses to him in Russia. He particularly hates and fears ethnic Russians who are Ukrainian patriots, like Oleg Sentsov. The Russian FSB targeted Sentsov, fabricated a terrorist plot where Sentsov would be put forward as the leader, and they snatched him on 11 May 2014. The FSB agents tortured Sentsov: they put a bag over his head to suffocate him, beat him, and humiliated him. The Russians illegally stripped him of his Ukrainian citizenship, and forced on him Russian citizenship.

As the documentary The Trial reveals, the kangaroo court proceedings about Oleg Sentsov were drawn out for over a year to achieve two purposes for the Putin regime. Russian TV audiences were treated to a steady diet of hate propaganda against Ukraine. As Sentsov himself said in his final address to the court, Russian propaganda is very effective. Most Russians believe that Ukraine is run by fascists, that Crimea joined Russia on its own, that there are no Russian soldiers in Donbas, that Russia is a morally superior nation, and that all of the West is out to get Russia.

Everyone else in the world was treated to an exercise in state terrorism: Russia was proud to show that an innocent man was going to go to prison for a long time based on blatantly falsified evidence. The FSB even planted a grenade in Sentsov’s apartment, which they “found” on a second search, wrapped in a cinematography newspaper. The Russians could not possibly insult Western principles of jurisprudence more blatantly than that. The inherent absurdity of the trial of Oleg Sentsov was not an accident but was its intent all along. The people are utterly defenseless when evidence of guilt or proof of innocence is of not the slightest interest to the judiciary of Russia.

Sentsov is Putin’s hostage. Putin needs the world to see that, as the only thing that keeps Putin in power now is his confrontation with the West and his deliberate offenses against Western values.

The Trial gives voice to thoughtful and informed Russians. With the Revolution of Dignity, Ukrainians made their European choice and gave themselves hope. But as a man from Saint Petersburg who was supporting EuroMaidan observed,

“Russia has not moved along from the Soviet Union.”

Speaking during a raid by police against the showing of a Sentsov film in Moscow, a Russian woman lamented: “All that happens in this country happens in such a shady way.” These thoughtful and informed Russians felt hopeless, but considering what was happening in Ukraine they detected a glimmer of hope.

The documentary The Trial closes with the address of Oleg Sentsov to his show trial. Showing the noble spirit of the man, his words are an inspiration to the Russian people. Although he had just been sentenced to 20 years in prison, Sentsov was a free man speaking to a slave nation, telling them they did not have to keep living as slaves.

He forgave the Russian propagandists: “They know everything as it is, but they continue to lie.” Oleg Sentsov focussed on the core truth that terrifies Vladimir Putin, and that is that if Ukrainians can have a Revolution of Dignity then Russians can too. “The rule of the Bloodthirsty Dwarfs in your country will end very soon,” said Sentsov. He gave the good reason for his forecast, by talking about Ukraine and Yanukovych: “We also had a criminal regime, but we came out against it.” Sentsov learned to overcome his fear, and he believes Russians can overcome theirs just as Ukrainians like him did.

“What is the point of having principles if we are not prepared to fight and even die for them?”,

he asked. Oleg Sentsov ended with a wish “for the informed part of the Russian population, that they learn not to be afraid.”

Find a screening of The Trial: The State of Russia vs Oleg Sentsov. See this documentary. The story of the trial is infuriating but Sentsov is inspiring. Come away with the words of one of Sentsov’s filmmaker colleagues, Agnieszka Holland, in your ears:

“Say ‘Release Sentsov.’ It’s the only thing we can do to feel human.”