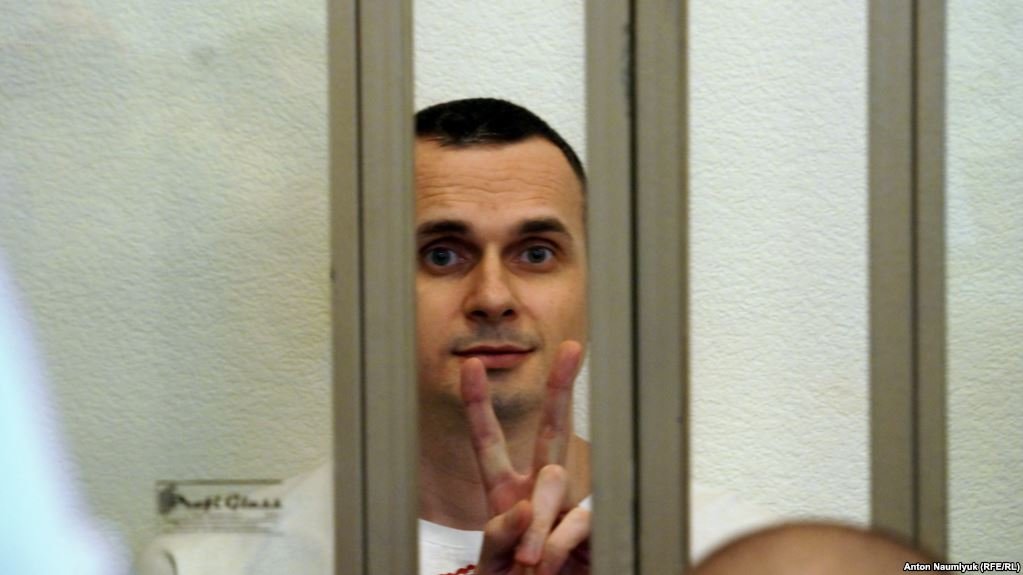 Ukrainian filmmaker Oleg Sentsov whom Russia sentenced to 20 years in prison has announced a termless hunger strike, demanding to free all the Ukrainian political prisoners held by Russia. He announced this is in a letter to his lawyer, Dmitry Dinze, RFE/RL reported. “I, Oleg Sentsov, citizen of Ukraine, illegally sentenced by a Russian court and currently imprisoned in Labytnagi declare a termless hunger strike as of 14 May 2018. The only condition for ceasing my hunger strike will be the release of all Ukrainian political prisoners held in the Russian Federation. Together and to the end! Glory to Ukraine!” says the letter.

According to RFE/RL journalist Anton Naumlyuk, Sentsov prepared his organism for the hunger strike for one and a half months, having lost weight by cutting down on food. After writing a statement to the head of the colony, he started the strike on 14 May. According to the journalist, the colony management and representatives of the Human Rights Committee at Russia’s Federal Penitentiary Service asked Sentsov not to undertake the ordeal, but he was resolute in his decision, saying that his hunger strike would help raise awareness about Ukrainian political prisoners in Russia prior to the FIFA-2018 World Cup in Russia, which is set to start on 14 June.

“If I die before the World Cup or during it, there will be a resonance in favor of other political prisoners,” he told his lawyer Dmitry Dinze who visited him in Labytnangi and brought back the letter from Sentsov.

Speaking to Hromadske, Dmitry Dinze said he also tried to dissuade Sentsov from launching the hunger strike by offering him alternative methods such as filing an appeal for cassation in the Supreme Court, but the filmmaker refused, saying he doesn’t believe in the Russian judicial system. Sentsov also said that he hoped his hunger strike will force the European court to look into his case, inasmuch as there had been no reaction from it yet.
According to Naumlyuk, Sentsov has been isolated and is under the observance of a doctor. He was warned that if his health will critically decline, he will be fed forcefully. He has no claims to the colony itself. Addressing the common practice of the Russian Penitentiary Service to combat hunger-strikers by announcing them insane, he reminds that his case contains the result of a psychological-psychiatric expertise determining him as fully sane.
Oleg Sentsov, a native of Crimea, was arrested on 11 May 2014 shortly after the Russian occupation of Crimea. Together with three other Crimeans, Oleksandr Kolchenko, Gennadiy Afanasyev, and Oleksiy Chirniy, he was accused of “plotting acts of terrorism” and being part of the Right Sector, a far-right Ukrainian organization Russia outlawed. These accusations are based entirely on testimonies of Gennadiy Afanasiev and Oleksiy Chirniy.  Both Afanasiev and Chirniy have stated they were tortured by FSB, and after their “confessions” were sentenced to the least possible punishment for terrorism, 7 years of jail, whereas Sentsov, the “leader” of the “terrorist group,” was sentenced to 20 years and Kolchenko to 10 years. On 31 July 2015 Afanasyev retracted his testimony as given under duress. After that, he was beaten again in prison. Sentsov and Kolchenko have stated repeatedly that they were tortured and beaten, and there is nothing to assume that the same didn’t happen to Chirniy.
The trial being entirely based on forced testimonies, the alleged plot to blow up Lenin’s monument in Simferopol, Crimea which the prisoners are accused of, and the convoluted connection to Right Sector speak of a return of Stalinist show trials in Russia, according to Russian and Ukrainian human rights watchdogs.
Afanasyev was exchanged on 14 June 2016 together with another Ukrainian political prisoner, the elderly Yuri Soloshenko. Yet Sentsov, Kolchenko, and Chirniy are still imprisoned. Overall, there are at least 66 Ukrainian political prisoners in Russia who are imprisoned in both mainland Russia and occupied Crimea on trumped-up charges. The reasons for their imprisonment vary, yet most cases are used for the purposes of Russian propaganda, which portray the Ukrainians as dangerous criminal, terrorists, and saboteurs in order to justify Russia’s aggression against Ukraine.
At present, Sentsov is being held in the in the “White Bear” colony in the city of Labytnagi in Siberia.

He is not the only Ukrainian political prisoner to have announced a hunger strike. The now-released pilot Nadiya Savchenko has held lengthy hunger strikes against her falsified trial, Ruslan Zeytullaev, a Crimean Tatar construction worker accused of terrorism on the unproven basis of belonging to the peaceful Islamic organization of Hizb ut-Tahrir, had also launched a hunger strike demanding to stop repressions against him and other Crimean Tatars Russia is arresting en masse. And most recently, the Crimean farmer Volodymyr Balukh who was jailed for flying the Ukrainian flag above his house launched a hunger strike on 19 April 2018 and is still keeping to it.

Various filmmaking societies, intellectuals, and human rights organizations have called upon Russia to free Sentsov. And Ukrainian political prisoners held by Russia were cited as one of the reasons EU state officials should boycott the upcoming World Cup in a letter signed by 60 MEPs.

“As long as Putin is illegally occupying Crimea, holding Ukrainian political prisoners and supporting the war in Eastern Ukraine we cannot pretend that this tournament’s host is our welcoming neighbour. And as long as political dissidents and the free press are in constant danger in Russia and beyond, we cannot turn our backs on them to shake Putin’s hand in a football stadium,” says the letter.

Hopefully, Sentsov’s hunger strike will not be in vain and will serve as a reminder to EU politicians considering to visit the World Cup, and will shed light on a tragedy of Russian aggression which so far remains hidden from most of the world.