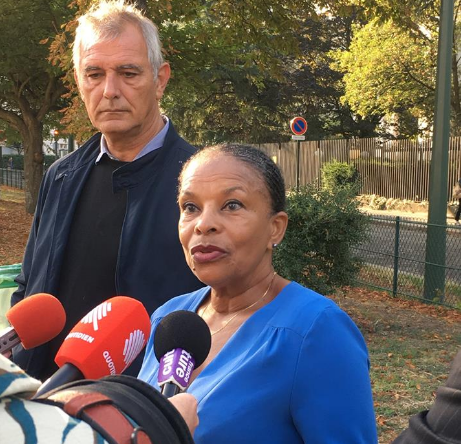 On 14 September, a collective of French filmmakers and intellectuals launched an initiative to support Ukrainian filmmaker Oleg Sentsov, who is on day 124 of hunger strike in a Russian prison colony, demanding the release of some 70 Ukrainian political prisoners held by Russia. For this, they will take turns hunger striking for 24 hours in front of the Russian Embassy in Paris to demand the release of the Ukrainian director in critical condition and the others he is starving for.

The group is coordinated by Christophe Ruggia, co-president of the Society of Film Directors, who says its goal is: “an unlimited chain of hunger strikers who will take turns until the release of Oleg Sentsov and other Ukrainian political prisoners imprisoned in Russia,” Liberation.fr reported.

The initiative has already placed a tent in front of the Russian embassy, where on Friday it kicked off with the participation of former Minister of Justice Christiane Taubira.

According to Liberation, dozens of people – directors, comedians, philosophers, politicians, writers – whose names will not be revealed in advance, to maintain the suspense, intend to participate in the mobilization. However, the first participant is known: he is filmmaker Laurent Cantet, whose awards include the Palme d’Or, the Golden Lion, an Oscar, and more.

On 17 September, the baton will be picked up by Cécile Coudriou, head of Amnesty International France.

Meanwhile, the chain hunger strike in support of Oleg Sentsov launched by Czech filmmakers continues. In that initiative, participants take 5-day turns fasting in support of the political prisoner. Their names can be seen on the site forsentsov.eu.

Sentsov launched the termless hunger strike on 14 May, demanding to free the Ukrainian political prisoners of the Kremlin, who, like he himself, had been sentenced by Russia for political reasons. There are circa 70 such prisoners. Recently, Sentsov confirmed in a letter that he will not stop his hunger strike.

Oleg Sentsov, a native of Crimea, was arrested on 11 May 2014 shortly after the Russian occupation of Crimea. Together with three other Crimeans, Oleksandr Kolchenko, Gennadiy Afanasyev, and Oleksiy Chirniy, he was accused of “plotting acts of terrorism” and being part of the Right Sector, a far-right Ukrainian organization Russia outlawed. These accusations are based entirely on testimonies of Gennadiy Afanasiev and Oleksiy Chirniy.  Both Afanasiev and Chirniy have stated they were tortured by FSB, and after their “confessions” were sentenced to the least possible punishment for terrorism, 7 years of jail, whereas Sentsov, the “leader” of the “terrorist group,” was sentenced to 20 years and Kolchenko to 10 years. On 31 July 2015 Afanasyev retracted his testimony as given under duress. After that, he was beaten again in prison. Sentsov and Kolchenko have stated repeatedly that they were tortured and beaten, and there is nothing to assume that the same didn’t happen to Chirniy.