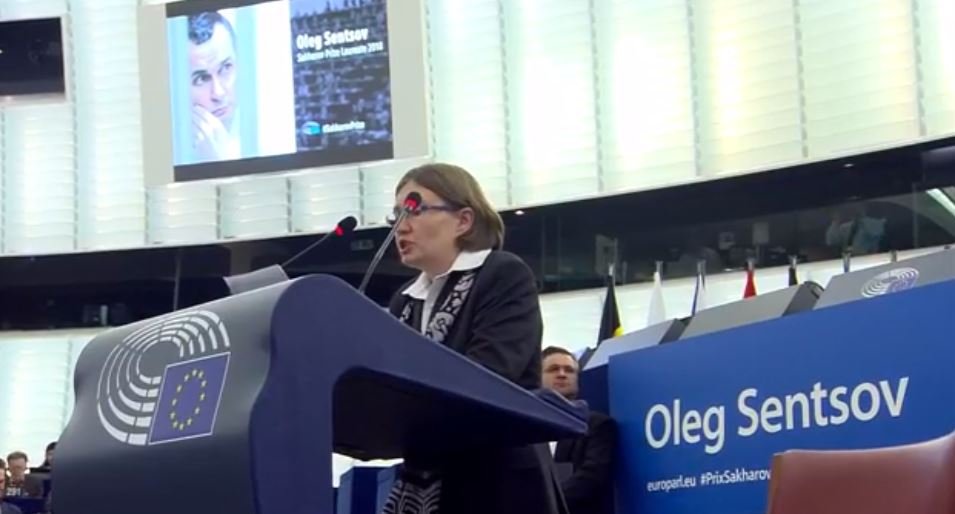 Oleg Sentsov’s cousin Nataliya Kaplan received the Sakharov Prize on behalf of the Ukrainian filmmaker imprisoned by Russia. Photo: screenshot from official broadcast of the ceremony

On 12 December 2018, the Ukrainian filmmaker Oleg Sentsov was awarded the EU Parliament’s Sakharov Prize for Freedom of Thought. He was not there to receive it, as he is serving a 20-year sentence in a Siberian prison after Russia arrested him in a trial human rights activists say is reminiscent of Stalin’s times. Instead, the prize was received by his cousin Nataliya Kaplan, who over the four and a half years of the imprisonment of Sentsov has been rallying around the globe for his release.

The EU Parliament chose Sentsov from a shortlist of three on 25 October. Sentsov is the first Ukrainian who had been awarded the Sakharov Prize.

After telling about Sentsov’s life, Kaplan read aloud his address to those present at the ceremony.

“Ladies and gentlemen, I cannot be present in this room right now. But you can hear my words, even if someone else is saying them. The word is the main tool of a person, and often it is his only tool, especially if everything else has been taken from him. With a word, you can cure, save, or kill – by commanding fire.

There are people whose words mean a lot. There are people vested with power and opportunities, but they use the power of their words in different ways. You can call to acceptance and surrender, but on the contrary, you can also call for resistance and fight, even when there is no chance to survive, but there is only a chance to die.

But it’s not so important how long you live, but how. It doesn’t matter when you die, more important is how and for what. You can be a simple farmer until 18 years of age, and then your own words raise up a whole country to resist, accept humiliation and martyrdom, and stay forever in history under the name of Joanne.

And you can live as a bloody ruler until a ripe old age, tirelessly uttering a flood of false words that your people would supposedly admire. And the world leaders would even shake hands with you, not wanting to quarrel with you. But after your death, your name will be damned right there, and the word “Bokassa” will become a general one, and it won’t be the only one.

Modernity is often not fair, but history is always fair. Over time, everything falls into place and is called by its proper name.

And someone falls down to the garbage heap, to the curses of the liberated people, along with the fragments of the monuments to himself, and someone who was persecuted and almost despised by all, on the contrary, after death, takes a worthy place in world history. And his name is given to streets, ships, and awards.

For example, Andrei Sakharov is a person to look up to. For me, it is a real undeserved honor to even stand somewhere near to him. He raised the bar of education and talent, intelligence and civility, dignity and humanism so high. And I hope that I can still have time to do something to feel that I have deserved this award. Thank you.”

The entire speech of Nataliya can be watched below. The full ceremony is available here.

Sentsov was arrested by the Russian FSB on 11 May 2014, shortly after the Russian occupation of Crimea. Together with three other Ukrainians, Oleksandr Kolchenko, Henadiy Afanasiev, and Oleksiy Chirniy he was illegally transferred to Russia and is being charged in “plotting terrorist acts.” These charges are entirely based on testimonies of Chirniy and Afanasiev, both of whom have stated that they were tortured by the FSB. On 31 July 2015, Afanasiev retracted his testimony, leaving the accusation in shatters, but the four activists were still sentenced to long terms in prison; of them, Sentsov was punished most heavily, having been sentenced to 20 years. Over the four and a half years of his imprisonment, he has remained unbroken and had for 145 days held a hunger strike, demanding to release the circa 70 Ukrainian political prisoners of the Kremlin, who, like him, are imprisoned by Russia without a crime.

The Sakharov Prize for Freedom of Thought, named in honor of the Soviet physicist and political dissident Andrei Sakharov, has been awarded annually since 1988 to individuals and organizations defending human rights and fundamental freedoms. This year marks the 30th anniversary of the prize. The prize, consisting of consisting of a certificate and €50,000 will be awarded during a ceremony in the Parliament in Strasbourg on 12 December. Sentsov was among three finalists for the 2018 Sakharov Prize. The other two are the NGOs protecting human rights and saving migrant lives across the Mediterranean Sea and Nasser Zefzafi, the leader of Hirak, a mass protest movement in the Rif region in Morocco.