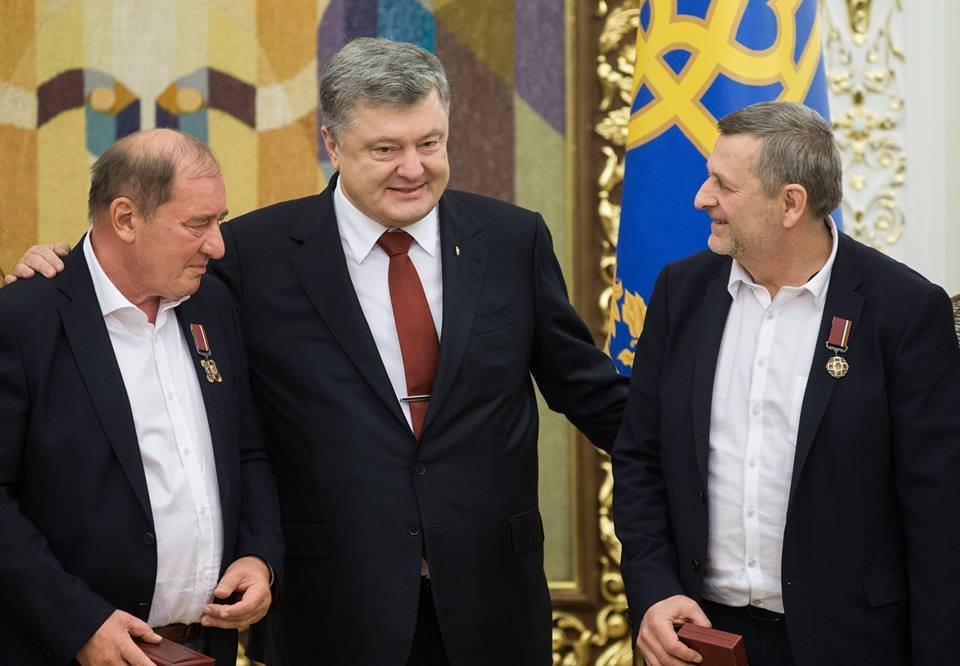 Crimean Tatar leader Akhtem Chiygoz, who was suddenly released from Russian captivity last week, has called on all those who fought for him do not stop pressure on Moscow until other Ukrainian de facto political prisoners are free. As the Kremlin seems to try whitewashing its image in hope of easing sanctions, forthcoming presidential election, and 2018 World Football Cup, such pressure can possibly succeed in the following months and bring victims of Russian political terror back to their families.

The people whose joint efforts were crowned with the recent discharge of two prisoners, can and should make Russia release more, Chiygoz, deputy head of the Mejlis of the Crimean Tatar People, said at Svoboda Slova talk show on ICTV channel this Monday.

Along with another Mejlis deputy head, Ilmi Umerov, also exempted from unlawful punishment, Akhtem Chiygoz was transferred from occupied Crimea to Turkey before coming to Kyiv this Friday. Perhaps it was just a coincidence, but 25 October, when he left the jail in Simferopol, happened to be exactly the 1000th day since his arrest. Ukrainian political prisoner, Crimean Tatar leader Akhtem Chiygoz after his release: “I say with pride: I am a citizen of Ukraine.” Screenshot from video by Krym.Realii

Why did Russia let them go?

“Sometimes, purely by chance, good things occur in Russia,” ironically noted Mustafa Dzhemilev, veteran leader of the Crimean Tatar national movement and a Soviet-time political prisoner, upon the arrival of Akhtem Chiygoz and Ilmi Umerov in Ukraine. “However, to make this chance possible, thousands and thousands of people were engaged.”

Commenters agree that Umerov and Chiygoz’s liberation became possible because the demands voiced by the leaders of Ukraine and the Crimean Tatar Mejlis were backed by Turkish President Recep Tayyip Erdogan, as well as the other governments and international institutions worldwide.

In Dzhemilev’s words, there are few presidents on earth who are still willing to shake hands with Putin. Erdogan is one who still preserves some kind of contact with Moscow so it was natural to draw him in the process of the prisoners’ release.

But why did Russia concede to those demands? Why did Putin let two of his high-profile hostages go, thereby infuriating some of his staunch adherents in the blogosphere, who considered that as an indication of “Russia’s total failure in Crimea”? Why did he pardon Chiygoz and Umerov, who can witness on a future international trial against his own regime? Zair Smedlyaev, head of the election committee of the Kurultai (national assembly) of the Crimean Tatars, notes that at least four motives may lay behind this decision:

Additionally, with the liberation of two high profile Crimean Tatar leaders, the Kremlin is making a curtsey to the Western and Muslim countries in anticipation of the FIFA World Cup, which Russia is to host next summer. Although Turkey did not qualify for the final part of the tournament, four other teams of largely Muslim countries managed to do that: Iran, Saudi Arabia, Egypt, and Nigeria, along with seven teams from the European Union. In this view, the release of political prisoners may serve Putin as a complimentary ticket for international guests to a politically charged sports event—much like it was before the 2014 Sochi Winter Olympics, when Putin pardoned his famous critic Mikhail Khodorkovsky, his business partner Platon Lebedev, and the activists of the protest punk group Pussy Riot Maria Alyokhina and Nadezhda Tolokonnikova.

The good news about Umerov and Chiygoz came in the context of Russia’s frantic attempts to relieve international isolation, believes Mustafa Dzhemilev. Yet, in his words, nobody should “fall for that bait” until all the Ukrainian hostages of the Kremlin are free and the borders between Ukraine and Russia are restored.

The liberation of the Ukrainian citizens held hostage by the Russian regime in Crimea, irrespectively of their ethnicity and religion, remains the priority for the Crimean Tatar Mejlis, reiterate both its head Refat Chubarov and Mustafa Dzhemilev.

During their reception at President Erdogan’s residence in Ankara, Akhtem Chiygoz and Ilmi Umerov personally asked him to facilitate the discharge of dozens of Ukrainian nationals from Russian jails. They particularly stressed the need to free the filmmaker Oleg Sentsov, who had been sentenced to the huge 20-year prison term for his participation in the Crimean anti-occupation resistance. A few weeks ago, Sentsov was transferred to serve it in Yamalo-Nenets Okrug north of the Arctic Circle. Ilmi Umerov told in the interview to Ukrainian Channel 5 that senior Russian security officers had threatened him with sending to the colony close to Sentsov’s if he would have refused to submit a plea of mercy to Putin. Trying to deceive Umerov, they falsely stated that Chiygoz had allegedly signed such a plea. The sick deputy head of the Mejlis, for whom the transportation to the Russian North could have become the last journey in his life, rejected that offer, and Chiygoz, in fact, did the same.

Several hours after their arrival in Kyiv, Umerov and Chiygoz visited the presentation of a new book about Sentsov and the photo exhibit devoted to a hundred children left without fathers due to unlawful arrests, abductions, and killings in occupied Crimea.

Letters and signs of solidarity help prisoners not to be broken

At the most emotional moment of their meeting in the Boryspil Airport near Kyiv, Chiygoz’s wife Elmira Ablyalimova embraced her husband, for whose fate she had been fighting since he was imprisoned in January 2015. “I wish to thank everyone who was with us all this time,” Ablyalimova wrote a few hours after that touching reunion. “We’ve endured and withstood owing to you! For a long 2 years and 9 months, in spite of the cold, heat, rain, or snow, despite all the obstacles and barriers, searches at the entrances to courtrooms, hostile and sometimes openly aggressive conduct and actions of bailiffs etc., no matter what, you were with us. […]

We the heirs of those who were deported in 1944 and, in fact, were convicted for nothing, who had the status of special settlers [a category of repressed persons under Stalin and Khrushchev] for long 13 years—we understand more than anyone the meaning of such words as ‘freedom,’ ‘dignity,’ ‘Homeland,’ and ‘rights.’”

Simple letters from supporters are extremely important for the political prisoners behind Russian bars, Chiygoz stressed at the press conference in Boryspil. He recalled the greetings from a Ukrainian child who had apologized for mistakes in the letter written in Russian. The boy had never learned Russian grammar in his school in Lviv, West Ukraine, but tried hard as only Russian-language messages have been transmitted to the inmates of Russian prison cells. Chiygoz got an impression that even his jailers felt respect to the persistence of the letter writers. Now he calls on everyone to write more.

Ilmi Umerov, Akhtem Chiygoz, and their lawyer Nikolai Polozov say that Russian authorities did not inform them of any ban on the entry of the ex-prisoners to the peninsula. Therefore they are eager to come back soon and resume their struggle there. “I don’t know if it’s dangerous or not to return to Crimea but I’m preparing to go back,” Umerov told the journalists. “It’s my Homeland. I am not afraid.”