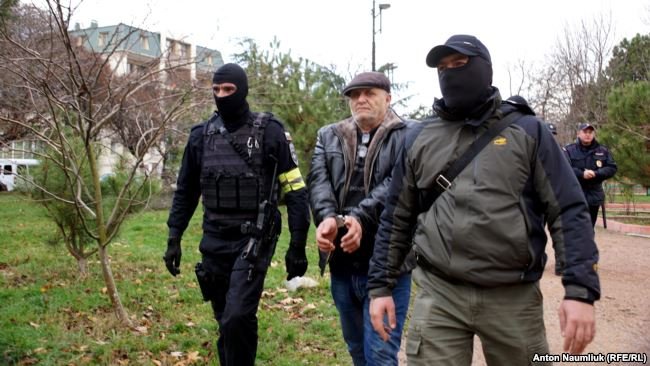 On 23 November 2017, the peaceful residents of the Crimean peninsula suffered the next wave of the attacks on the part of Russian occupation authorities in Crimea. Russia’s FSB [Federal Security Service] has conducted a number of unlawful searches in the private houses of eight Crimean Tatar activists. At the same time, five Crimean Tatar activists, Bekir Dehermendzhy, Asan Chapukh, Kyazim Ametov, Kurtseit Abdullaev, and Ruslan Trubach were detained in the city of Simferopol, with most of them being still unlawfully deprived of liberty.

Mrs Vedzhie Kashka, an 83-year-old legendary veteran of the Crimean Tatar national movement, was present at the site of this inhuman security operation and was also subject to the force. She felt bad at the detainment place and later the same day she died in the ambulance car.

We appeal to the Government of Ukraine, Governments of foreign states, and international organizations and request:

As noted above, unlawful searches took place in the private houses of eight Crimean Tatar activists in several towns of Crimea on 23 November 2017. Simultaneously with the searches in the houses, six activists, five of them of Crimean Tatar origin, were detained in Medobory and Marakand cafes in the city of Simferopol. They were detained by Russian security agencies without any notification on the detainment reason and access of defense lawyers. Those were Bekir Dehermendzhy, a 57-year-old father of a defendant in the “26 February case,” as well as the activists Asan Chapukh, Kyazim Ametov, Kurtseit Abdullayev, Ruslan Trubach, and Yuriy Baranov.

According to Russian mass media, who referred to the occupation law enforcement agency source, detainments and searches were conducted within the criminal case on the suspected extortion of money from Mr Yusuf Aitan, a Turkish citizen (Article 163.2 of the Russian Criminal Code; up to 7-year sentence). All searches and detainments took place with the non-proportional use of force, and the procedure rights of the detainees, including the right to defense, were not respected. The activists detained in Medobory café were kept lying handlocked on the floor for a long time. Most of the Crimean Tatar community members detained in the city of Simferopol were questioned by the security officers and have still been unlawfully kept in custody.

One of the detained was Mrs Vedzie Kashka, an 83-year-old Crimean Tatar national movement veteran. Once detained, she felt bad due to the unlawful force actions of Crimean “police.” Though the ambulance was called, she died on the way to the hospital due to a heart attack. Later the occupation authorities released a video of detaining these people, where the moment of her detention was cut out.

At night on 23 November, over twelve participants of single-man pickets of 14 November 2017 were handed notices on issuing administrative offense protocols under Article 20.2.5 of the Russian Code on Administrative Offenses (violation of the established procedure of holding the public event). For the time being, the names of two wronged persons are known: Dilyaver Asanov and Eldar Kantemirov.

We consider such searches and detainments as a new brutal wave of pressure on the civic activists and Crimean Tatar national movement members as well as further implementation of Russia’s policy of persecuting all the dissenters through the action of the occupation authorities.

The information circulated by Russian mass media regarding the passed away Vedzhie Kashka and unlawfully detained Crimean Tatars contradicts the reality. According to the words of the detainees’ families, Mr Yusuf Aitan, a Turkish citizen, in fact owed some sum of money to Mrs Kashka, a national movement veteran. However, the occupation authorities used the false flag operation to suppress the activists and disseminate fake propaganda in the mass media, including also the defamation of the Crimean Tatar Mejlis as the detainees were called its members.

The searches and accusations of single-man picket participants also indicate the politically-reasoned actions of the occupation authorities, which, since the seizure of Crimea, have been constantly persecuting any manifestations of freedom of thought and freedom of peaceful assemblies in the peninsula.

We condemn continuous unlawful and cynic actions of Russian occupation authorities in Crimea and appeal to the international community to take all possible actions in order to stop them immediately and de-occupy the Crimean peninsula.