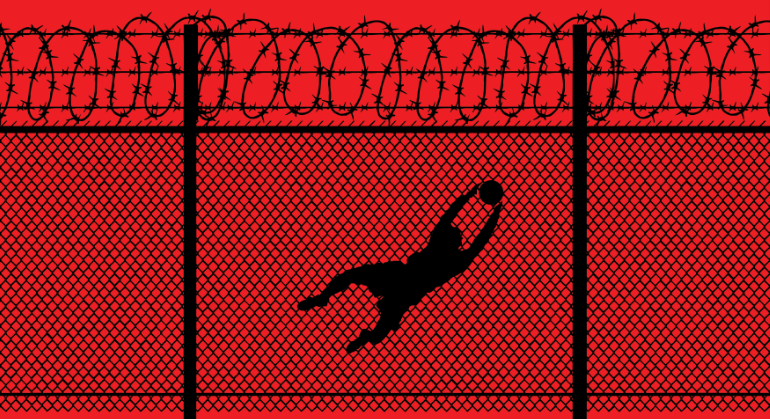 Fragment of poster to boycott the World Cup by Andriy Yermolenko

An open letter published on Open Democracy is appealing to leaders of governments, the teams of which will play at the Finals of the World Cup in Russia, to boycott the event which is set to start on 14 June. The letter has been signed by intellectuals, politicians, diplomats, cultural figures, human rights activists, and journalists. Among them are internationally known figures such as journalist and historian Anne Applebaum, historian Timothy Snyder, journalist Edward Lucas, politicians Rebecca Harms and Marieluise Beck, film directors Askold Kurov and George Genoux, writers Yuriy Andrukhovych and Oksana Zabuzhko, veteran Crimean Tatar leader Mustafa Dzhemilev.

Addressing the leaders of the 31 countries, the teams of which will compete in Russia (Australia, Iran, Japan, Saudi Arabia, South Korea, Egypt, Morocco, Nigeria, Senegal, Tunisia, Costa Rica, Mexico, Panama, Argentina, Brazil, Colombia, Peru, Uruguay, Belgium, Croatia, Denmark, England, France, Germany, Iceland, Poland, Portugal, Serbia, Spain, Sweden, and Switzerland), the letter reminds that Russia is holding 70 Ukrainian political prisoners in custody. Many of them have been convicted under torture and using false evidence. It is for their release that Oleg Sentsov has launched a hunger strike on 14 May, timing it to coincide with the World Cup. Here is the full text of the appeal:

The main football event of the year, the World Cup, is drawing closer. It will take place in Russia despite this country occupying the Ukrainian peninsula of Crimea, unleashing a war in eastern Ukraine, supporting the brutal dictator Assad and war crimes in Syria, curtailing the democratic rights of its own citizens, repressing the indigenous population of occupied Crimea – the Crimean Tatars, interfering in the elections of western countries and unleashing a disinformation campaign against them.

Your Excellencies, the list of Russia’s crimes can be continued, however, one stands out. On 14 May, the jailed Ukrainian filmmaker Oleg Sentsov, who had resisted the occupation of his native Crimea in 2014, announced a termless hunger strike. The only condition for ending it is the “release of all Ukrainian political prisoners held on the territory of the Russian Federation”. There are at least 70 such prisoners, and the number increases each day.

Oleg was sentenced to 20 years in a penal colony as a result of a falsified trial. Other political prisoners have been convicted in a similar manner: on the basis of false “confessions” obtained under torture, fake witnesses, planted ammunition. The latter was the reason for the arrest and conviction of Volodymyr Balukh, a Crimean farmer who rejected the occupation of Crimea and kept raising a Ukrainian flag over his house. Balukh is holding a termless hunger strike for over 70 days since 19 March, balancing between life and death. Also on hunger strike, in solidarity with Sentsov, are Oleksandr Kolchenko and Oleksandr Shumkov. The number of arrests and sentences grows with each day. Just on 4 June, Ukrainian journalist Roman Suschenko was sentenced to 12 years of “severe regime” imprisonment in Russia on baseless mystery “spying” charges. All these tragedies go unnoticed by the world.

Russia has established a real repression machine in occupied Crimea. Civic activists among Crimean Tatars are being arrested in droves and accused of terrorism. Also accused of terrorism is the 19-year old Ukrainian Pavlo Hryb, whom the FSB kidnapped while he was on a trip to Belarus. The list of political prisoners is long and each name in it represents a shattered fate and children left to grow up without parents (see more information here).

Your Excellencies, all of these Ukrainians became victims of Russia’s undeclared war against Ukraine. In authoritarian Russia, their purpose is to be broadcast on state TV playing the role of “enemies,” “terrorists,” and “extremists,” inciting the hatred of Russians towards Ukrainians and Crimean Tatars, and ramping up support for Vladimir Putin’s aggressive politics.

Oleg Sentsov has declared that he intends to hold the hunger strike until the fatal end. This is a realistic scenario: one has to only recall his letter from prison, where he wrote about Ukrainian political prisoners: “If we are destined to become nails in the lid of the tyrant’s coffin, then I would like to be such a nail. Just know that this nail will not bend.” And he told his lawyer: “If I die before the World Cup or during it, then there will be a [public] resonance in favor of the other political prisoners.”

A hunger strike is the only weapon that the imprisoned filmmaker has to counter the horrendous injustice against 70 Ukrainian citizens.

Your Majesties! You, the powerful of this world, have another weapon. One of the dreams of Vladimir Putin is to use the presence of foreign dignitaries at the tribunes of the World Cup to embellish his image of a “strong leader” and as visual support for his politics of repressions and wars. You can take the side of the filmmaker who was sentenced for protesting the occupation of his native Crimea by joining the political boycott of the World Cup, inviting others to follow your lead if you have already done this, and calling upon Russia to fulfill the demands of Oleg Sentsov and release all Ukrainian political prisoners. History shows that leaders of authoritarian states prefer to put on a mask of mercy before sports events.