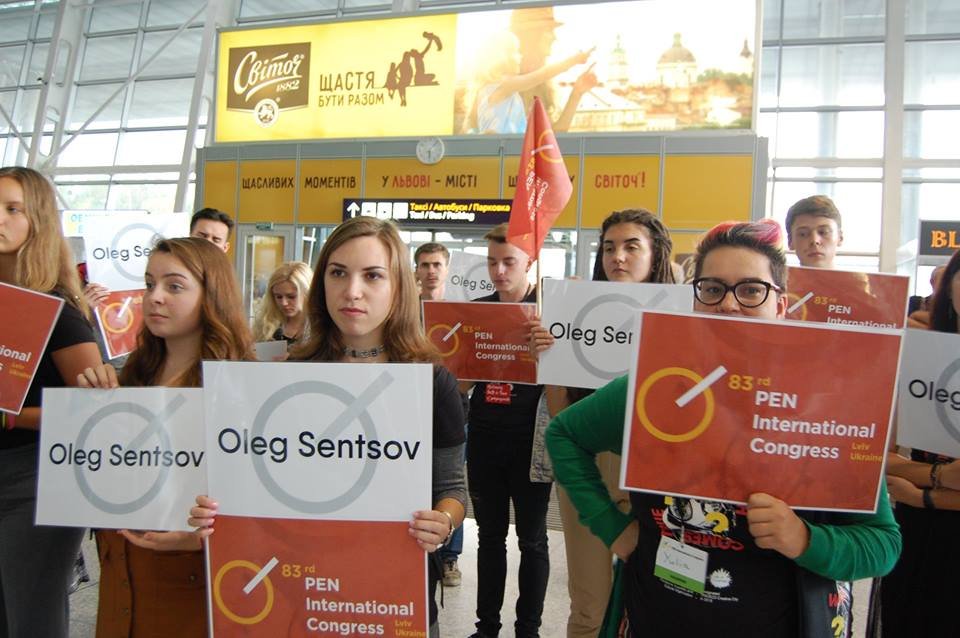 The PEN club meeting in Lviv started out from a flashmob of volunteers in support of Oleg Sentsov. Photo: zaxid.net

A report presented at the 83d congress of PEN International calls on Russia to release prisoners of conscience, among which are Ukrainian filmmaker Oleg Sentsov, journalist Mykola Semena, Crimean Tatar leaders Ilmi Umerov and Refat Chubarov.

The delegates of the 83th congress of PEN International convened in Lviv, West Ukraine, assure that they will not stop demanding the release of Oleg Sentsov, as well as other Ukrainians and Russians persecuted by the Kremlin regime for saying or writing what they think.

PEN International is the authoritative creative association, which promotes the role of literature and intellectual dialogue and advocates the right to free expression since 1921. In September 2017, its congress gathered more than 200 writers, journalists, and artists representing over sixty centers from around the world. The main topic of the congress was reclaiming truth in the times of new censorship, propaganda, and “fake news.”

In their statement on the International Day of Peace, 21 September, the members of PEN International call for combating the attempts to curtail freedom of speech and information. They specifically condemn the media warfare, which accompanies Russia’s “relentless” aggression against Ukraine (at the same time, expressing concercondemning Ukraine’s measures :

“The proliferation of propagandist half-truths and implicit lies has demonstrated that, once again, truth is the first casualty of war. Courageous individuals who dare to report facts that are critical of Russian policy have suffered the consequences, and too often these have been grave.”

#Ukrainian writer & filmmaker #OlegSentsov introduced as the Empty Chair case for the opening day of the #83PENCongress pic.twitter.com/HlQn9rAOpw

As the congress proceedings started, the delegates cheered the news coming from Iran: Mahvash Sabet, a poet, teacher, and one of the leaders of the Baha’i religious community in this country, was released after almost a decade of her detention. Sabet has served nearly half of her initial sentence she had got for alleged “espionage” and “propaganda” against the Islamic Republic. International PEN was advocating her liberation for years and made her a face of the Imprisoned Writer Day campaign in 2014.

At the same time, some chairs were symbolically left empty at the Lviv congress to honor the literati still suffering from persecution in various countries.

The first Empty Chair was for Oleg Sentsov, a Ukrainian writer, filmmaker, and political hostage of the Moscow leadership. In 2014, Sentsov had taken an active part in the civic resistance to Putin’s invasion and occupation of Crimea. Russian authorities had arrested, brutally tortured, and sent Sentsov to serve huge 20-year sentence in Siberian prisons. This year, PEN America had bestowed on him its prestigious Freedom to Write Award.

Read more: The Sentsov-Kolchenko case: what you need to know

The delegates of the Lviv congress got an opportunity to watch Askold Kurov’s documentary The Trial: The State of Russia vs. Oleg Sentsov, as well as the spectacle Numbers based on the script written by Oleg himself. The organizers of the show call the script a sinister prophecy of “how people turn into numbers—numbers of criminal cases and articles.”

Magda Carneci, President of PEN Romania, admits that she heard nothing about Oleg Sentsov before the congress but stresses that the support of such personalities as him is the mission of the PEN community. She hopes the current Russian regime will fall long before Sentsov’s full prison sentence expires.

An appeal to the intellectuals across continents to stand by Ukrainian citizens suffering under the Kremlin’s occupation arrived to Lviv from Mykola Semena, the veteran Crimean journalist and member of the Ukrainian PEN Center. On 22 September, a Russian court is to pass a verdict in the criminal case of Semena’s writing that the end of the illegal occupation of Crimea and its return to Ukraine are inevitable. Read more: Meet Mykola Semena, the Crimean journalist prosecuted for disagreeing with Putin’s landgrab Earlier the participants of the Forum of Publishers held in Lviv in the run-up to the PEN congress urged influential opinion-makers to speak out in defense of Kremlin’s Ukrainian prisoners, including Mykola Semena and Roman Sushchenko, a Ukrainian correspondent to France, who had got arrested and jailed by Russian secret police in Moscow a year ago.

“The right words and gestures of support from well-known authors, who have millions of readers,” their statement reads, “can be compared to powerful international diplomatic efforts on the release of the hostages of the Russian government.”

In his address to the world writers congress, Semena thanks the international PEN community for supporting him and other dissident journalists in Crimea. As he notes, one could hardly imagine the more appropriate topic of the PEN congress in view of the threat the dictators pose to the freedom of expression around the world. This particularly concerns the Russian repressive policy in occupied Ukrainian regions since 2014:

“False propaganda distorts history, glorifies only one nation, attacks the basics of democracy, stirs up the feelings of international and inter-religious enmity. Independent media are destroyed, freedom of speech and meetings is canceled, all kinds of peaceful protests are treated as terrorism and extremism, civil activists are thoroughly repressed.”

Global democracy, Mykola Semena writes, can and should prove to be stronger than any weapons, tyrants, and aggressors. He suggests the creation of the international monitoring committee to document human rights violations in Crimea and bring this issue to the international court. The report Russia’s Strident Stifling of Free Speech prepared by International PEN, Free Word Association, Memorial Human Rights Center and other organizations was circulated among the delegates as an official document of the Lviv congress. It touches upon the criminal cases trumped up in the context of the Russian war against Ukraine. Among them are the cases of Crimean dissidents: Sentsov, Semena, and deputy head of the Crimean Tatar Mejlis Ilmi Umerov, who is likely to be convicted for saying on TV that Crimea legally belongs to Ukraine.

The report also lists a number of Russian bloggers prosecuted for criticizing Putin’s aggressive policy toward Ukraine on social media: Rafis Kashapov, Vyacheslav Kuteinikov, Andrey Bubeev (released in 2017 after two years in colony), Ekaterina Vologizheninova, Vadim Tyumentsev, Aleksey Moroshkin, and Andrey Marchenko. One more phantasmagoric case mentioned in the document is that of Natalia Sharina, ex-director of the Ukrainian library in Moscow, convicted for holding “extremist literature” on the bookshelves. In conclusion of the report, PEN International calls on Moscow to stop the politically motivated repressions, particularly those related to the Russian-Ukrainian conflict, and immediately release all the prisoners detained for exercising their legitimate right to the freedom of expression.

The delegation of the Russian PEN Centre, which had nearly fallen apart after its leadership refused to back the petition asking President Putin to free Oleg Sentsov, was not present in Lviv. Instead, the congress recognized the status of the St. Petersburg PEN as a new independent collective member of the international writers community.